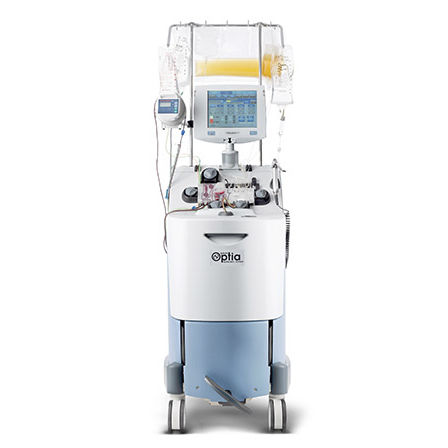 What is Therapeutic Apheresis?

WHAT TO EXPECT: A qualified veterinary surgeon and nursing team in TPE are responsible for operating and monitoring your pet throughout the procedure.

CONNECT: Under sedation, a central intravenous catheter is connected to your pet’s vein via their jugular for the procedure.

A small portion of your pet’s blood is removed and mixed with a fluid that prevents the blood from clotting. Most of your pet’s plasma is separated and removed from the other parts of their blood. The remaining parts of your pet’s blood are mixed with the new replacement plasma and then returned to your pet. After the procedure, your pet is awakened, monitored and given cage rest to aid their recovery.

Immune-mediated haemolytic anaemia (IMHA) is a condition where the body’s immune system attacks and destroys its own red blood cells (Erythrocytes), thus leading to severe anaemia, an unhealthy yellow colouring of the tissues called jaundice or icterus as well as an assortment of life-threatening complications.

In essence, this means that your pet’s immune system, which typically fights of invaders and infections, is now fighting your pet’s own red blood cells.  This results in the red blood cells being destroyed, causing anaemia as well as inflammation resulting in damage around your pet’s whole body.

In most of cases the cause or trigger point of this immune reaction is not known. During the acute episode of IMHA reactive antibodies are showing up in large numbers of the patients’ blood system and attaching themselves to the surface to the Erythrocytes.

This leads to “clumping” (agglutination) of the red blood cells before they are being destroyed. Immunosuppressants such as Prednisolone, Azathioprine, Cyclosporine and Mycophenolate are used to control the immune reaction. Unfortunately, the downregulation of the immune reaction can take several days to weeks.

Plasma apheresis, also called Therapeutic Plasma Exchange (TPE) allows us to rapidly remove the offending antibodies alongside with waste products (e.g.Bilirubin) from the patient. This procedure, albeit not curative, buys time for the immunomodulators to work.

Based on the same principle, Therapeutic Plasma Exchange is also very effective in the treatment of severe Immune Mediated Thrombocytopenia (IMT), a condition frequently encountered in animals suffering from IMHA.

Effects of a single (3-hour) TPE treatment to correct severe in-saline agglutination in a dog with IMHA, Immunie-mediated hemolytic anemia.

Therapeutic Plasma Exchange should be considered as a FIRST LINE treatment for severe IMHA.